In Spring of 2007 I decided to start running…I never ran a day in my life prior to that. I started speed walking (because I love walking), and then realized that I could start intermittently running during my speed walking. Over the summer of 2007, I managed to run 4 miles a day, 6 days a week, and lost approx 30 lbs. It was the most revitalizing experience ever  and 30 months later, I’m still into it (though I must admit, there have been periods of inconsistency) .

This past summer, needing a new pair of running shoes, I went all out and decided to do the Nike+ running thing…sensor and shoes to accommodate sensor. Some really surprising things happened since this purchase, because it became a more tangible means by which to monitor my running.

Before Nike+, I was averaging a running pace of between 9-10 minutes/mile. I would be the one many regular runners would pass repeatedly in the park during their run. My first monitored run of 4.24 miles in July 2009 was 9min 8secs. Unbeknown to me, I discovered I am competitive! The Nike+ was not only what I needed to boost my interest in running, but to become a better runner. I was able to challenge myself in terms of pace, personal bests and distance (the latter I am still working on 😉 ). My best 5 km (3.1 miles) is 18 min 9s (by the way, I haven’t been able to run more than 10km).

Currently, I run an average 6 min/mile and discovered I am so very competitive. In October, I decided to join a Nike+ challenge to run 100 miles prior to Jan 16/09. I completed my 100 miles in 25 runs (about 6 weeks), so I’ve decided to keep up the challenge and trying to get another 100 miles in before Christmas. 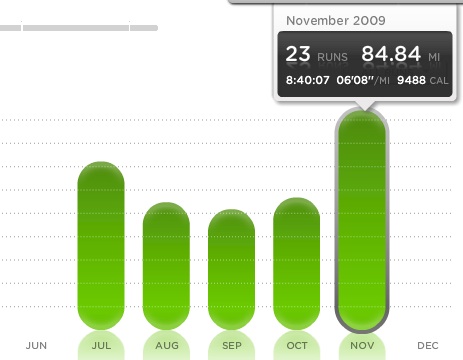 You can see that I’ve taken this challenge rather seriously, given that the distance I’ve run in November is comparable to the distance I used to run way back in the Spring of 2007 (since I was running a regular 25 miles weekly).

Once I get comfortable (secure) with my endurance, I think I need to challenge myself to running for a cause…

P.S. Oh yeah, the Nike+ website allows my updates to be tweeted, when it works 😦

I was fortunate enough to have a paper accepted at the 26th annual conference of Calico ’09,  my first Calico conference ever. It was an experience that surpassed any and all expectations (how often can we say that?!). Different aspects of the conference that made it so memorable include the venue, the presentations, the participants and the discussions that happened online and off.

Arizona State University is a large, modern campus abounding with art, architecture and green space. The fact that the talks were mainly in the lower level of Coor Hall (a glass ice cube with etched text fragments and letterforms) could easily be forgiven, given they were fully equipped to meet all our tech needs.

The presentations I attended were, for the most part, very interesting and engaging. There were 6 concurrent sessions, which made selecting a session quite difficult. Thankfully, there will be podcasts and presentations available on the site (organized by @msiskin) so anything I missed I can listen to at a later date. Getting a glimpse of the gamut of investigations conducted in technology (more specifically, Web 2.0 applications) and foreign/second language learning, was very inspiring. The range of research is incredible…but as @glordward mentioned in her session, we are such preliminary stages of research, focusing much of our research agenda on students’ evaluation of the implementation of various tech tools. Hopefully, in the very near future we will begin to see investigations that demonstrate concrete evidence in terms of benefits to language learning in terms of increased proficiency.

My presentation, 4:30 on the Friday afternoon, went well. I had a smaller turnout (read below to find relativity in this statement) but was well-tweeted on the back-channel thanks to @judifranz, @glordward and @eRomanMe. It was the Pageflakes project, about which I have previously posted, on which I collaborated with @kahnp and @hellermd98. Another little bonus was the idea of Twitter Crowd Status as a widget, thanks to the ingeniuty @sethdickens, which the audience seemed to like.

The participants in the various sessions I attended were equally as engaging as the presenters themselves. I met a number of intelligent, interesting and committed scholars and researchers who provided feedback and were involved in each session. Being able to connect with these people, network with them was rewarding. Even more rewarding would be future collaborations and/or discussions.

From this, I must highlight two different things that occurred during the conference that impacted me the most, both related to Twitter.

The Twitter back-channel
This is the first conference that I attended that had as much of an online discussion via Twitter as it did in the actual presentations. The dynamic presenters were so engaging that they created discussions both in the session and on twitter. Many people in our respective communities joined in on points raised during the presentations as we tweeted them. Read, for example, @eslchill’s post about his presentation being retweeted (i.e., shared with a different twitter following by a member of @eslchill’s community) by someone who wasn’t at the conference. It is a great success when you find approximately 22 pages in a search for the #calico09 hashtag. (Btw, the other hashtag used was #calico2009)

This was a great experience for me, the avid twitter aficionada, to participate actively with so many other great twitter conference goers. Additionally, I had received a DM re a position opening, and that given my interests, as indicated by my tweets at the conference, I might be interested in pursuing. LOL! If only this had happened pre-tenure, maybe I would have considered it 😉

An impromptu presentation on Twitter
My first day at the conference (the first day of sessions) brought about another personal success. There was a presentation to be given, entitled “24/7 Twitter” at 11:00 a.m. The classroom was full—standing room only (about 50+ people; great news for Twitterati). However, the presenter was a no-show. After a few moments, the chair of the session asked if there was anyone who wanted to say something about Twitter. The phenomenal Claire Siskin (@cbsiskin) spoke briefly to what an effective tool Twitter is and then I, in a moment of self-indulgence, commented that the 4th chapter of the monograph, which was given at registration, was based on my initial investigation on Twitter in the intermediate Italian class.

One thing led to another, then I heard myself saying: “Well, if you would like, I could give the presentation. I have my flash drive with me.” Yes, what a über geeky thing to say! The audience was very indulgent and I gave my impromptu talk about my work with Twitter and language learning. I must admit, this was one of my most rewarding, professional experiences.

Calico ’09 was an amazing conference and I look forward to the next year’s conference in Boston. From the conference program, I created this wordle to give you an idea as to the top 200 terms. Enjoy 🙂

An interesting international conversation on Twitter this morning caught my attention and prompted this poll. The three participants I follow, @josepicardo (UK), @nergizk (Bursa) and @courosa (Canada), were engaged in a dialogue about the ways in which we use Twitter, the purpose of following and the right to unfollow, and the idea of community membership (just to name a few topics).

I WANT TO KNOW…what is your main reason for tweeting? Please feel free to add another option. There is no wrong or right answer! (how many profs actually say that?)

FYI, here are 4 soundbites, in chronological order but not sequential as the real dialogue occurred on Twitter. In an attempt to perceive the whole conversation, I used search.twitter.com (this link will be relevant for a limited time, given it provides real time search results). If you can view these results, you will see it was a perfect example of a many-to-many conversation between participants who may or may not have been following one another. 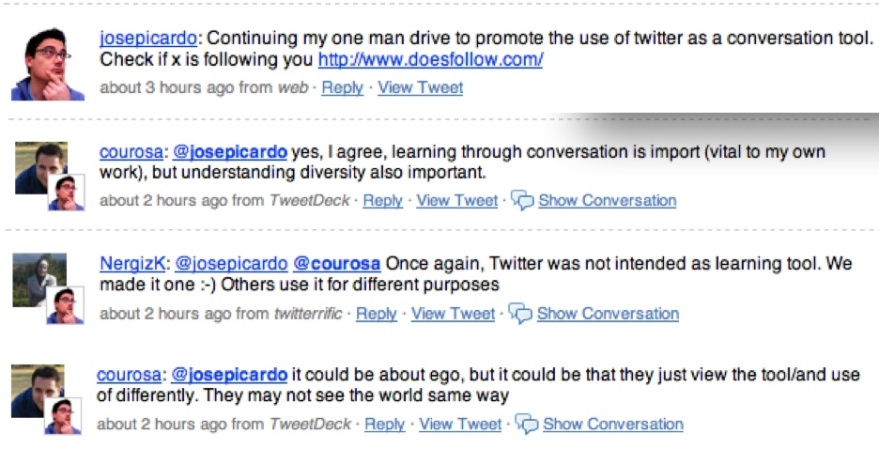 I finally decided to create my own twitter wordle…words have great significance, even when taken out of context, wouldn’t you agree? Here is what is important to me evidently 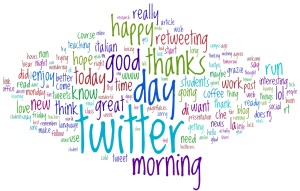 Preparing this tenure application has led me to another question about academia in the age of social media. I have mulled over the process vs. the content in a previous post, the medium as the message based on Wesch’s article and also posted on how-to integrate technology in my teaching without disrupting the flow of the teaching and learning process.

The question I have been pondering lately is this:
What role does a read-write web platform play in the dossier of an academic?

This may seem like an absurd question given the level of expertise a scholar is to establish in her research. This level is validated by publications in prominent journals and books, by invitations to speak at international conferences and to participate at different events as an expert, and it is hoped that these invitations come both within academia and beyond.

I’ve been truly fortunate to have had a paper accepted by the official journal of the American Council for Foreign Language Educators, which has a circulation of approximately 10,000 subscriptions in membership and also has found in approximately 1000 libraries. Now, past issues are available on the net for members only, but anyone affiliated with a university can access the journal online through institutional library services. Impressive numbers, are they not? Well, I’ve been trying to do the math and realize that I cannot do more than determine the probability of people actually reading it. In reality, there is no way I can ascertain how many people actually read my article. If I’m lucky, maybe a 100 at best.

Now, let’s turn to the world of the read-write web. Perhaps I wouldn’t be able to determine with certainty how many people read it, but I could see how many views my article gets, as Intellagirl tweeted yesterday. Let’s look at this exchange:

(refers to her presentation on Web 2.0 Secrets: SEO, SEM, and Web Traffic)

Would any member of the administration of an American college or university consider the number of hits, favorites, downloads, etc. as valuable for a decision on hiring, tenure, promotion, recognition, etc.? I believe in the age of web 2.0, where social networking fosters an environment for sharing and transmitting knowledge (no longer limited to the ivory-tower library), we can’t ignore the importance of web views.

My next question is who determines how these significant numbers play into the decision-making process?

P.S. on tweetclouds.com, it even gives you an occurrence count, and the option to include or suppress @replies (not included on mine).