Before I get back to the grind, I had to catch up on some e-reading…tweets, blogs, news. It seems that some people never really take a break from their social networks, and for that I am grateful. Much reading, as you can imagine, also occurred as it was written, in real time, so to speak. So for those who also spent time away and played catch up like me, their return was also appreciated.

In particular, I would like to thank @ophelia for these precious gems this morning. Being I love food as much as I love social networks (able to resist overindulgence but also known to binge time and time again), I had to compile them for your reading pleasure. Enjoy! 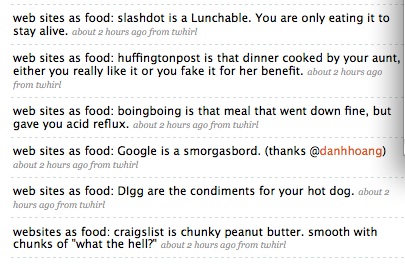 UPDATE: As of Jan 25 (9:25 when I checked), the correct translation now appears.

Less than 12 hours ago an interesting article appeared on gawker.com about Google translator & Heath Ledger’s death. Notice the translation image (from the site) translated Heath Ledger as Tom Cruise! Ha!

Needless to say that the error has not yet been corrected. Interestingly enough, if I just gave Ledger, no first name, it is not translated. Then, when I substituted another first name (mine for example), the translation of ledger becomes “libro mayor”.

Apparently, a freudian slip by some of the geniuses at Google? Is someone having a little fun at work? 😉