Economic crisis, reevaluation of programs, reallocation of resources, restructuring of priorities…this process is leading everyone in this country to make difficult decisions to deal with current realities.

For those of us who feel that these decisions are outwardly wrong, we unite and make our voice heard. This has been the case with the language programs cut at SUNY-Albany. If you aren’t aware of the dastardly attack on the humanities, here is the decision being protested from around the world.

In October, UAlbany president George Philip announced that the campus is suspending admissions to five programs — French, Russian, Italian, classics and theater — in the wake of an unprecedented budget shortfall.

This decision has created quite an uproar not only from academics directly affected, but from constituents in higher education from administrators to scholars to students. Stanley Fish blogged about this crisis (in two parts). Other institutions are aiming to revive the humanities.

Ultimately, once decisions like this one reached at SUNY-Albany are made, there is little hope at reversing it, despite the most comprehensive attempts made by all. As a faculty member, I have participated in letter writing (both in its traditional sense and by email correspondence), and have disseminated information to others too.

I even zealously tweeted about the online petition immediately after I learned about it. I imagine a smile or a smirk appearing on the lips of you readers as you get to this paragraph. You are probably thinking, “There she goes with Twitter again. Isn’t there a statute of limitations?!” No, there isn’t! 😉 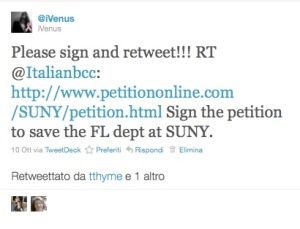 It was retweeted by a number of members (more than just the 2 in the image above!) in my personal learning network (PLN). One tweep asked if international signatures would be accepted. I did not know whether their signatures would be counted, nevertheless many of us pleaded with everyone in our PLN to sign the petition and retweet the information to their PLNs. Three days later, I tweeted this:

My last tweet on October 13/10 showed an increase of 2,960 signatures over the three days in which I tweeted it and it was retweeted. I am not naive enough to think that Twitter was solely responsible for this increase of almost 3,000 signatures in 3 days, but I do credit my PLN on Twitter with helping disseminate information about the petition quickly and effectively. Tweeps in Italy, Spain and England, people across NJ and the rest of America united to be heard on the SUNY-Albany cuts.

The penultimate paragraph of the timesunion.com articles tells us

The document has garnered signatures and comments from 37 foreign countries, particularly in Europe, Asia and the Pacific, as well as 49 U.S. states and the District of Columbia.

Although I will never know for certain, I firmly believe that the far-reaching arm of Twitter contributed to the extensive national and international representation of the signatures on the petition.

You may think this is a lost cause and I have tweeted and blogged for no reason…but there still are so many lessons to learn from this, at so many different levels.